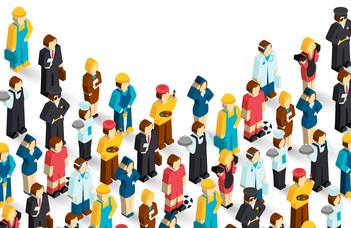 One week ago, our research group held a workshop with a very welcome guest, Hannes Siegrist. Professor Siegrist has been publishing on the history of professions for more than three decades, and has become one of the foremost experts on the topic, as well as the Professor Emeritus for Social and Cultural History of Contemporary Europe at the University of Leipzig, and a guest professor at, among others, École Normale Supérieure and CEU.
He joined us to give a talk about the concept of professional autonomy, and the role it played in negotiation the relationship between state, society and professions. He closed his talk with a few remarks on the ambigous role of professions within a State Socialist society, and the various forces threatening professional autonomy in the present day. Afterwards, members of our group raised questions related to their own research, and Professor Siegriest weighed in on these specifically Hungarian anomalies of professionalisation. The workshop closed with the introduction of our upcoming publication in the social studies journal Replika: a block on professional autonomy that prominently features a translated text by Professor Siegrist himself.

A thematic block on the Autonomy of Professions forthcoming in the next issue of Replika, Social Scientific Journal is the first collective product of the Research Group on the Hisotory of Professionalization.

The introduction of the block is written by Márkus Keller and Zsuzsi Kiss and it presents the historiography of the concept of autonomy in professionalization theories. It starts from Parson’s functionalist school which regards professional autonomy as a kind of reward for those who possess particular and unique knowledge and skills and utilise these to maintain social integrity. To put it somewhat oversimplified: autonomy is the right of professions as groups and professionals as individuals to define the methods and rules of their work.

A next crucial author&theory presented in the text is Eliot Freidson, whose investigations on the history of physicians (medical doctors) in various countries (published in the 1970s – which is important to be mentioned here to emphasise the gap-filling feature of our issue), so whose investigations drive our attention to the relationship of professions and states, professions and political authority that proves to be one very important dimension which is in the centre of the case studies, as well.

From Freidson it goes to Randall Collins and visits the American theories, and finally Hannes Siegrist’s thoughts on the history of continental European professional autonomy are also presented. At the end of the introduction a summary on what has so far been done on the topic in Hungarian is presented.

After the introduction two translations follow, from the afore-mentioned authors. First is a text of Hannes Siegrist, originally published in a book which he edited with Dietmar Müller in 2014. The book is called: Professionen, Eigentum und Staat. Europäische Entwicklungen im Vergleich – 19. und 20. Jahrhundert that very well reflects the focal points of both the book itself and that of the chapter now translated. One important point to be emphasised is the comparative method used and the second one is the longer historical period that is investigated – both very important and not really common in Hungarian historiography of professions. Prof. Siegrist’s paper shows that professions in this perios were united in their striving to disestablish heteronomy and claim autonomy, and by examining the professionalisation of various professions he reveals rather different forms of this process. He highlights these complex situations by systematically introducing different examples as well as discussing, in addition to academic professions, the unique paths of certain artistic fields towards their autonomy.

The next text is Randall Collins’s Market Closure and the Conflict Theory of the Professions which is a delicacy for the sociologist colleagues but also enlightening for historians who are or would like to become familiar with a sociological perspective on the long term process of professional rivalries. This paper approaches the process of professionalization through the lens of sociological conflict theory.

Market closure is not an easy-to-translate term (to Hungarian, at least). Viktor Tátrai’s text, then, first points out that Max Weber’s concept of Schließung has undergone significant changes during the writing of Economy and Society and then briefly outlines the contemporary context of neo-Weberian closure theory and its relationship to the original concept of Weber. Finally, it overviews the Hungarian reception and summarizes the arguments for a new Hungarian translation of the term: closure.

Viktor Papp writes about the Hungarian legal professions, precisely on the “culture of complaint” of lawyers that was expressed via the professional press of lawyers and which aimed at broadening professional autonomy. It is important to see – and that is also well elaborated in the paper – that post 1870, lawyers gained wide-ranging autonomy and a chamber system was also set up, but lawyers were still dissatisfied with the jurisdiction granted to them. By the examination of how their given autonomy was used and their pragmatic utilization of the ethical codex leads the author to infer that lawyers actively used the jurisdiction granted to them, and successfully developed mechanisms that allowed goals that were only indirectly included in the paragraphs.

Gergely Magos presents a paper which is a case study on the Sovietization of Hungarian pharmacy. He demonstrates how the traditional labour of pharmacists, meaning the manual, magistral preparation of medicine was reorganized in order to fit the requirements of a Soviet-type planned economy: that is, how pharmacists’ work was made measurable, and thus subject to centralized norms. Regarding autonomy, the paper shows, how the suppression of manual medicine production and the support for Taylorian labour organisation may also be interpreted as a curtailing of individual autonomous work.

Last but not least the issue contains a paper from Márkus Keller, the principal investigator of the group. He investigates the development of the professional autonomy of Hungarian secondary school teachers in the second half of the 19th century. He argues that despite the growing control and regulation by the state and the influence of churches in the period, secondary school teachers and teaching staff had considerable professional autonomy.

There are three key perspectives which are thoroughly used in the case studies. First, the relationship of professionals and society (as clients, users and consumers); then, the relationship between a given profession and the state; and finally, the relationships between a profession and other occupations and professions. The historical sociological case studies featured in the block demonstrate the particularities of these perspectives and provide us with deep insight into the struggle for autonomy of teachers, lawyers and pharmacists. And we do frankly hope that these papers will encourage fellow researchers (both historians and sociologists) to test and improve the methods, theoretical considerations and concepts used in these texts.

Click here to watch the full video of the workshop!

We are preparing another online workshop in the topic of professionalization!

On June 24, 2021 will be held the last online workshop of the semester organized by the Professzionalizáció-történeti Kutatócsoport (History of Professionalization Research Group) (Eötvös Loránd University Faculty of Social Sciences, Faculty of Humanities).

- Roundtable Discussion with the Authors of the Thematic Issue

The Professions and Autonomy workshop will start at 15.30 o'clock in the MS Teams app. (To join the meeting click here!) 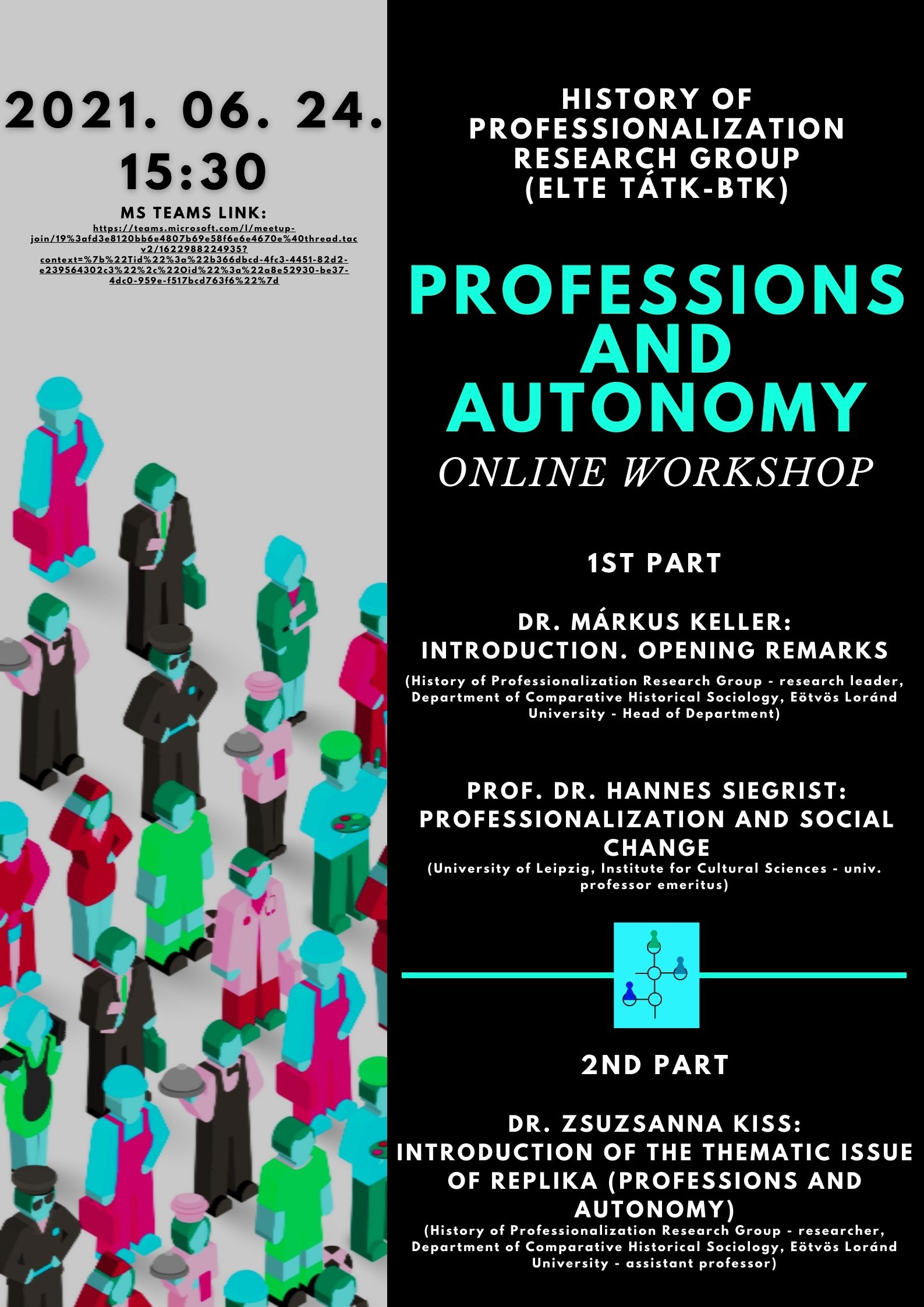